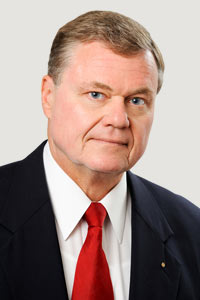 Respected trial attorney Donald A. Lykkebak defends clients against investigations and at trials in Orlando, Tampa, Tallahassee, Gainesville, Miami and other locations as may be required by the client.

The Reputation. Don Lykkebak is the “Defense Lawyer to High Fliers” (Wall Street Journal). In over 40 years of practice as a criminal trial attorney, Don has left his marks on the U.S. justice system like few others. In some of the most controversial and high-profile cases in Florida and nationally, Don has gained a reputation among executives, physicians, lawyers, and business owners as the go-to attorney when their reputation and freedom are at stake and they need a skilled defense lawyer to crush the government’s case in court. By any standard, Don is not a plea attorney who recommends clients to plead guilty out of fear or hesitation to face the prosecutor or the jury in court. The courtroom is his living room.

Acquittals Obtained. Don is most known for his acquittals. It would be easier to list the index of state and federal penal codes than listing every acquittal Don has ever obtained for his clients during his career. Just in recent years, Don has triumphed in cases involving the following offenses: healthcare fraud, mail fraud, wire fraud, bank fraud, securities fraud, mortgage fraud, bank embezzlement, racketeering and money laundering. Don has handled every possible degree of drug defense involving all controlled substances.  Many of his cases were featured in both national and local news media.

Don is board certified in criminal trial by the State Bar of Florida and the National Board of Trial Advocacy.  He has been recognized year after year by peers as Martindale-Hubbell (AV rating) “Preeminent Lawyer”. Most recently, he was recognized in Central Florida as White Collar Criminal Trial Lawyer of the Year by Orlando Magazine, the leading publication of its type.  In 2017, he was named Criminal Trial Lawyer of the Year and featured in the same notable publication.

Mr. Lykkebak is available to discuss your case in a confidential consultation at his Winter Park office convenient to the Orlando Federal Courthouse as well as the Orange County State Courthouse facilities.

Mr. Lykkebak is the founder of the The Law Office of Donald A. Lykkebak.