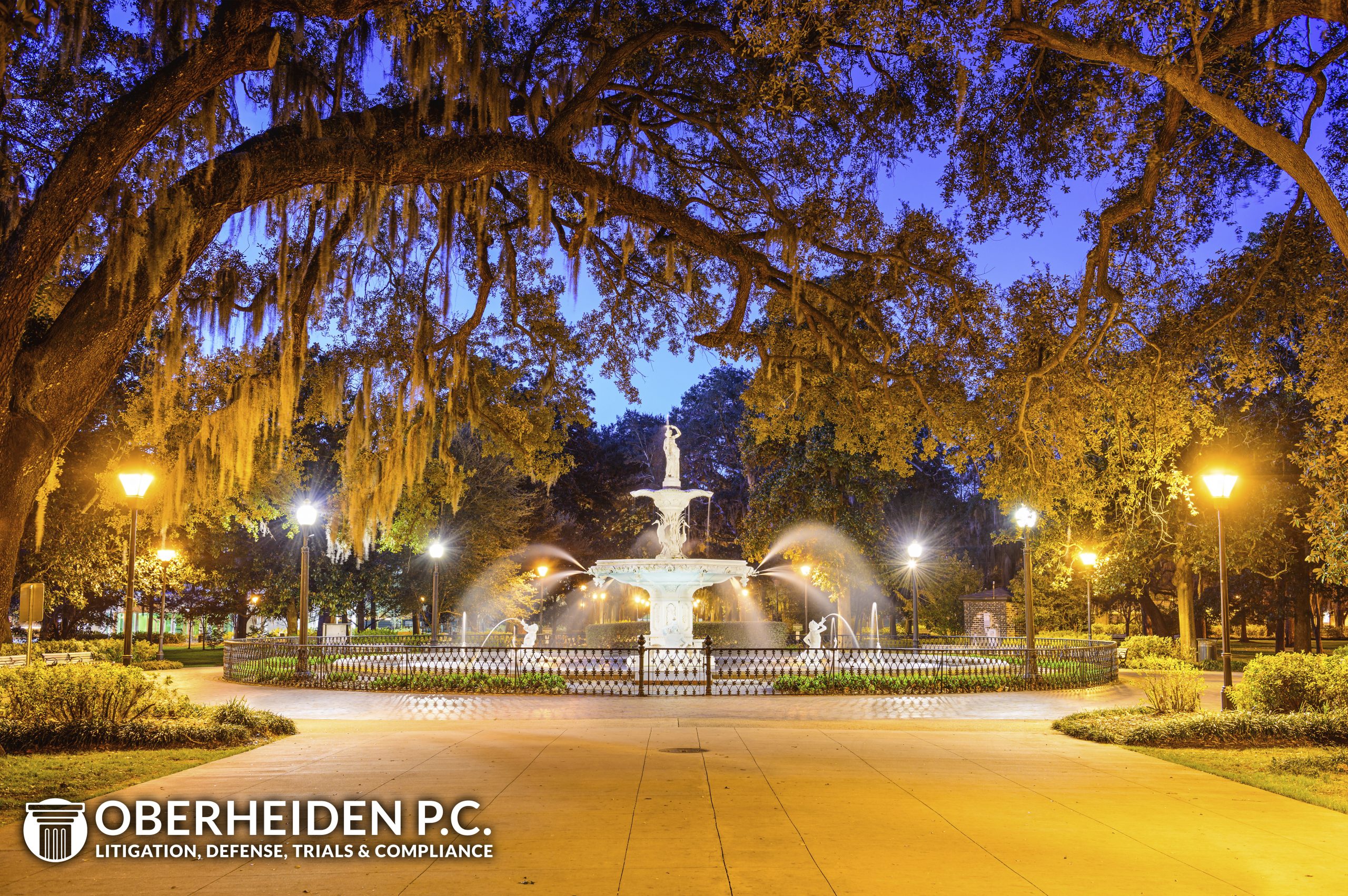 Our federal defense lawyers have centuries of experience in federal cases and have handled thousands of investigations, grand jury proceedings, and trials across the country. If you are being targeted for federal criminal prosecution in Atlanta, Augusta, and anywhere in Georgia, call 888-680-1745 to speak with a member of our defense team in confidence.

Facing a federal criminal investigation is an extremely serious matter. Most likely, federal agents and prosecutors are targeting you for multiple related and unrelated offenses; and, in the aggregate, you could easily be at risk for millions of dollars in fines and decades of federal imprisonment.

If this sounds severe, it is. If it sounds far-fetched, it isn’t. Federal agencies such as the Drug Enforcement Administration (DEA), Department of Justice (DOJ), and Federal Bureau of Investigation (FBI) devote substantial resources to criminal investigations, and federal laws such as the mail and wire fraud statutes (18 U.S.C. Sections 1341 and 1343) and the anti-money laundering statutes (18 U.S.C. Sections 1956 and 1957) will apply in most cases regardless of the specific substantive allegations at hand.

At Oberheiden, P.C., our federal defense lawyers provide aggressive and uncompromising legal representation for individuals and companies facing criminal allegations in Georgia. If you are the target of an active investigation, we will intervene in the investigation and seek to prevent charges from being filed. If you have received a federal grand jury subpoena, we will do everything possible to protect you against being indicted. If you have been charged and are awaiting trial, we will work tirelessly to secure a favorable result out of court; and, if necessary, we will utilize our attorneys’ centuries of collective experience to provide vigorous representation at trial.

Regardless of the current status of your case, the key to maximizing your chances of a favorable result is to seek legal representation immediately. Once you engage our federal criminal defense team to represent you, our Georgia federal criminal defense attorneys will begin working diligently to determine the scope and nature of the allegations against you, and they will work as a cohesive team to develop a defense strategy focused on achieving a favorable result as efficiently as possible. With a team that includes several former federal prosecutors, we can examine your case from the government’s point of view, and we can use our experience on both sides of plea negotiations and federal criminal trials to strategically pursue a positive outcome regardless of the facts at hand.

We are available to handle cases in the Northern, Middle, and Southern Districts of Georgia involving the DEA, DOJ, FBI, Internal Revenue Service (IRS), Office of Inspector General (OIG), U.S. Postal Inspection Service (USPIS), and all other federal agencies and task forces. This includes (but is not limited to) cases involving allegations of:

Having the benefit of representing the government and the targets of federal investigations in thousands of cases, we are able to offer our clients strategic and focused defense representation based upon decades of real-world experience. This experience has shown us that prompt intervention is one of the keys to success in federal criminal cases, and it has taught us that close, high-level attorney-client interaction is crucial to developing successful arguments for dismissal or acquittal. As a result of these insights, in every case, our approach to federal criminal defense involves:

What Do You Need to Know if You Have Been Contacted by Federal Agents from the DEA, DOJ, FBI, IRS, OIG, or USPIS?

1. What Should You Do if Federal Agents Come to Your Home or Office?

You should never agree speak with federal agents without your attorney present. If federal agents come to your home or office, you should politely decline their request for an interview and assert your right to legal counsel. Even if they say that you are not the target of their investigation (i) this may or may not be true, and (ii) you could become a target if you share incriminating information.

Learn more: What to Do When Federal Agents Come to Your Home or Business.

2. When Can Evidence Be Kept Out of a Federal Criminal Case?

There are a number of reasons why evidence obtained during a federal investigation may be inadmissible in a subsequent criminal trial. During the government’s investigation, it is important to be aware of these reasons, and to speak with your Georgia federal criminal defense lawyer if you have any reason to believe that federal agents have violated your legal or constitutional rights.

Learn more: When May Evidence Be Suppressed from Use at Trial?

3. What Does it Mean to Have “Criminal Intent”?

A key distinction between federal civil prosecution and federal criminal prosecution is the element of intent. Intent is a distinct concept from motive, although both concepts focus on the defendant’s mental state at the time of the alleged commission of the offense at issue.

Learn more: What is Criminal Intent?

4. What Does it Mean to Be Implicated in a Federal “Conspiracy”?

The federal conspiracy statute is one of the most-potent weapons in the federal government’s arsenal. Under this statute, you can be charged with a federal crime even if no substantive offense was committed, and even if you were not personally involved in the overt planning stages for a contemplated potential crime.

Learn more: What Is a Federal Criminal Conspiracy?

5. Is it Possible to Resolve a Federal Criminal Case Without Going to Trial?

When facing a federal investigation, the ideal scenario is to terminate the investigation before charges get filed. However, if you cannot avoid an indictment, then you will need to re-focus your efforts on the pre-trial process. Even at this stage, it is possible to resolve a federal criminal case without going to trial, and our attorneys have a substantial record of success during the pre-trial process.

What should I do if the FBI shows up at my house?

If the FBI comes knocking, the first thing to do is to find out why they are there. Sometimes, FBI agents stop by someone’s home or business to ask questions pertaining to an open investigation. If this is the case, you are under no obligation to speak with FBI agents. You can politely decline. If they have sufficient evidence suggesting a crime was committed, FBI agents may show up with a search warrant. In this situation, you will need to let the FBI agents in to search your home or business. However, again, you do not need to speak with them and should not do so without first consulting a Georgia federal criminal defense attorney.

What is white-collar crime?

White collar crime is the term used to refer to a wide range of financial crimes. The government tends to most often bring these charges against politicians, executives, entrepreneurs and other professionals. White collar crime includes corporate fraud, embezzlement, extortion, money laundering, investment fraud and many other offenses. It is a common misconception that a conviction for a white collar crime is taken less seriously than those for “street crimes.” In fact, those convicted of these offenses are often sent to jail and suffer many other serious and potentially lifelong consequences. White collar crimes are typically very complex, and require an experienced Georgia federal criminal defense attorney.

What is a grand jury subpoena?

A grand jury subpoena is a formal document issued by the United States’ Attorney’s Office demanding an individual either appear in person or produce the documents outlined in the subpoena. Essentially, if you received a grand jury subpoena it means the federal government believes that you either committed a federal crime or have knowledge of the government believes is important to their investigation. However, it may not be clear what the federal government’s intentions are, as federal investigators typically don’t disclose details about an investigation until they’ve presented evidence to a grand jury. If you received a grand jury subpoena, how you handle the situation is imperative as a wrong move can raise suspicion where there may have been none to begin with. Thus, it is important you reach out to an experienced Georgia federal criminal defense attorney to go over your options as soon as possible.

What should I do if I’m indicted?

If you have been indicted your sole focus should be on finding an experienced Georgia federal criminal defense attorney. Ideally, you would have secured a lawyer before the charges were filed; however, it is not too late. The nature of a federal investigation is that, by the time you learn of an indictment, federal prosecutors have already conducted a thorough investigation and established that there was probable cause you committed the crime by presenting their case to a grand jury. While this means that the prosecution has a head start, and that you should act quickly to retain a Georgia federal criminal defense attorney, it does not mean that you will be found guilty.

Should I try to negotiate a plea agreement or take the case to trial?

Deciding whether to fight federal criminal charges or seek a plea agreement is a very important decision that should not be made without speaking to a Georgia federal criminal defense lawyer. In some cases, the government’s case is weak or the evidence it plans to use can be kept out of trial. It may not make sense to plead guilty in this situation. However, in other cases, accepting some level of responsibility can result in the U.S. Attorney offering a sentence that is much lower than you could expect if you took the case to trial and lost. If you recently learned that you are being charged with a federal crime, reach out to a Georgia federal criminal defense lawyer immediately to discuss your options.

When should I speak with a Georgia federal criminal defense attorney?

As soon as possible. The nature of a federal investigation is that you won’t necessarily know you are under investigation until charges are filed. If you are fortunate enough to learn of an investigation before you formally face federal charges, you should take advantage of this by talking to a Georgia federal criminal defense attorney immediately. Your attorney may be able to meet with prosecutors to clarify your lack of involvement or effectively address the concerns of the federal prosecutors. Even if charges are inevitable, the sooner your attorney gets to work developing an effective defense strategy, the better likelihood of success.