Think about it. If even current DOJ-Prosecutors and active FBI Special Agents hire New York City federal criminal defense lawyer Dr. Nick Oberheiden to defend against federal criminal charges and internal OIG investigations in New York, then Nick’s reputation within the Justice Department and his demonstrated skillset ought to be good.

Meet NYC federal defense attorney Dr. Nick Oberheiden. Unlike most NYC white collar criminal defense lawyers you may find advertising for drunk driving and shoplifting defense next to their federal criminal “expertise,” Nick has dedicated his entire career to exclusively defending people accused of white-collar offenses. In hundreds of federal cases spanning more than 35 states, Nick has built an exceptional track record of avoiding criminal charges in approximately 94% of all government investigations and in 100% of all grand jury cases. Recent examples include:

Featured for his federal practice by media stations in all 50 states, Nick offers executives, entrepreneurs, CEOs, accountants, lawyers, physicians, dentists, and business owners a unique experience and performance track record in government investigations. The difference between Nick and other lawyers already becomes apparent when you call Nick. Instead of sending you to secretaries or paralegals, Nick answers all calls personally, including on weekends. What are you waiting for? Call 212-970-9468 and get answers to your most pressing questions.

Most lawyers you will interview will tell you one of two things: a) don’t worry, you had no intent and/or b) let’s see what the government does and then we defend. Both statements are fatal.

No Intent. There is nothing less impressive for a prosecutor to hear from a defense attorney that, yes, my client did these things, but he did not commit the offense knowingly, willfully, or intentionally. Prosecutors hear this all the time, every day, in court and in plea negotiations. The truth is the “no intent” objection that so many lawyers carelessly use is an absolute last resort. It’s never a starting point even though it is abused and misinterpreted as such.

Factual Defenses. Much more powerful are factual defenses. But here is the problem: factual defenses require lawyers to actually listen to their clients and to care for their clients’ side of the story. From taking over a few cases per week from other lawyers, Nick is shocked in every single case how little time the previous lawyer has spent with the client and what miniscule effort was dedicated to a factual analysis. At the end of the day, facts are the difference between being guilty and walking away. Facts are a 100-times more compelling than the “no intent” argument.

Understanding the Law. Many lawyers don’t understand the law. No joke. Take a complicated Medicare Fraud case to a criminal defense attorney and ask him/her spontaneously how they would analyze Medicare Form 485 in this case. Don’t settle on “let me do some legal research.” If you have a serious legal problem, like Medicare Fraud, and your lawyer needs to do research, you may need to move on. If your lawyer does not know the law, he will never be able to convincingly explain the law to a jury. More so, your lawyer will be completely overwhelmed if, in the example of healthcare fraud, your lawyer has to defend your interests in a negotiation with highly trained FBI healthcare fraud agents and federal prosecutors in charge of civil and criminal Medicare fraud investigations.

The main lesson Nick has learned early on was that the more time the government is given to investigate, the more likely they will bring charges. Vice-versa, the earlier an experienced attorney gets involved, intervenes, and introduces factual corrections and defenses, the less likely it is the government will pursue the case further.

If you find yourself in the unfortunate situation that your business is under investigation or you received a government subpoena, then don’t commit the number one mistake: don’t wait. Call our NYC white collar crime defense attorneys at 212-970-9468 the investigation before things escalate to your disadvantage.

The term white collar is used to describe non-violent offenses such as financial crimes and money laundering, theft and embezzlement, healthcare fraud, Medicare fraud, mortgage and bank fraud, securities and investment fraud, as well as public corruption and bribery. 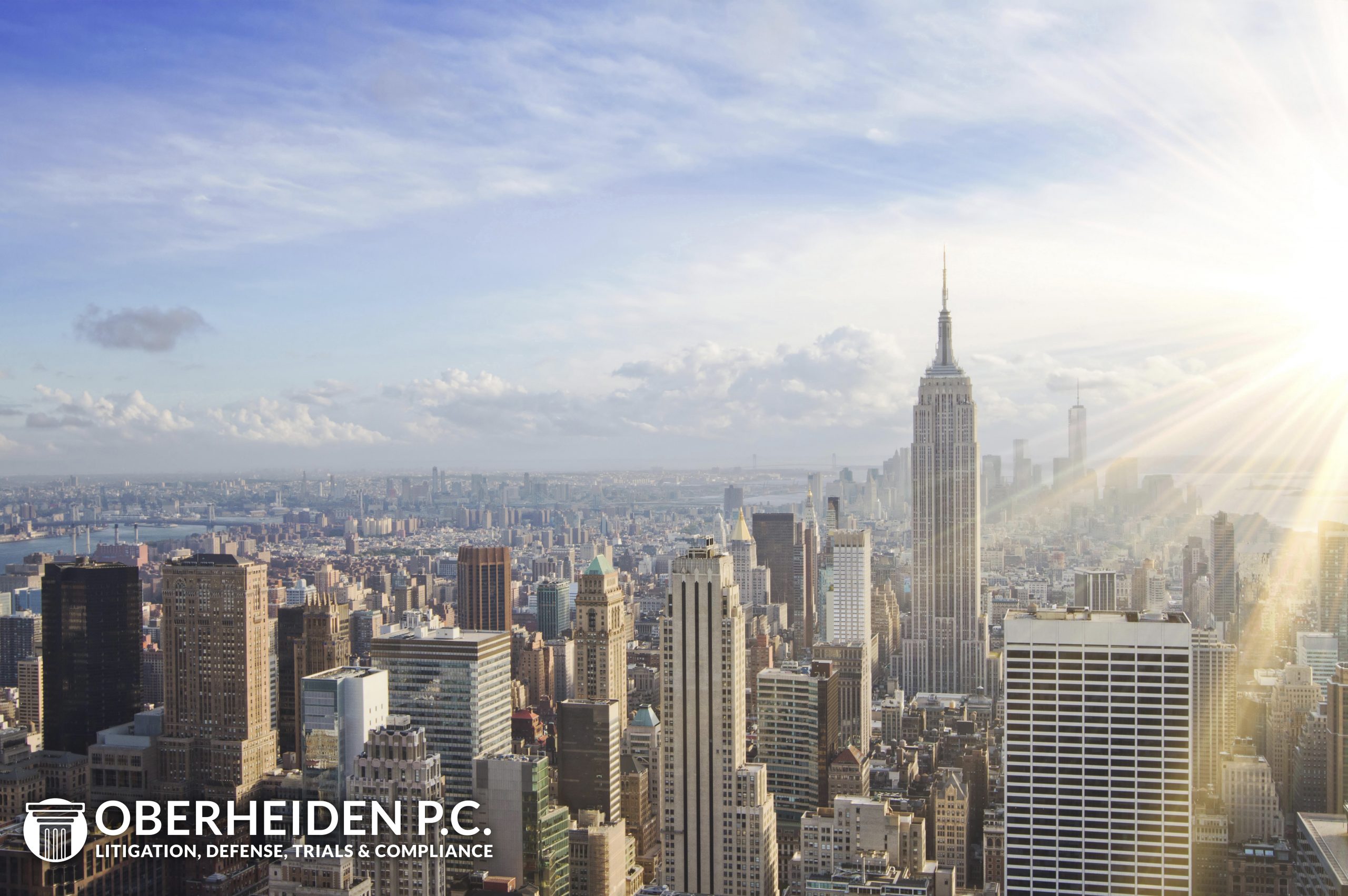 Most white collar investigations are federal. That means that the United States Department of Justice, the FBI, the SEC, the IRS, the DEA, and other law enforcement agencies are in charge of the case and your lawyer’s primary contacts. In NYC, most federal fraud cases are handled by the U.S. Attorney’s Office for the Southern District of New York. In specialized matters, such as healthcare fraud, the Office of Inspector General (OIG), the Department of Health and Human Services (HHS) and the Medicaid Fraud Control Unit (MCFU) may lead the investigations.

How Do I Know If the Investigation Is Civil or Criminal?

When rumors of an investigation evolve, one of the imminent and most pressing questions is whether the case is civil or criminal in nature. Indeed, the early stage of a government investigation is sometimes not easy to read in terms of the scope, objective, and targets of the investigation. The good thing about white collar investigations compared to cases involving violent acts like kidnapping, rape, or murder is that almost always does the investigation announces itself. The bad thing, however, is that too many people either ignore or deny clear signs of a criminal case and delay required and effective defense mechanisms.

Importantly, the mere fact that federal prosecutors or federal law enforcement agencies are involved is not conclusive by itself to determine the nature of the case. Unknown to many, the Department of Justice (and the FBI etc.) is divided into a criminal and a civil section. Prosecutors in each of those two sections operate independently and exclusively meaning interaction and coordination between civil and criminal investigators is missing at times.

This division sometimes results in parallel proceedings, in which case a matter is both under civil and criminal scrutiny. You will know that your case is criminal if the investigation involves grand jury subpoenas, search warrants, seizure warrants, arrests, or an indictment. By contrast, most cases that are False Claims Act matters, whistleblower and qui tam cases, Civil Investigative Demands (CID), OIG subpoenas, or DOJ records subpoenas tend to be civil in nature.

If you experience any of these signs or become aware of federal agents attempting to interview you or your business affiliates, you need to consult with an experienced New York City white collar criminal defense attorney right away to keep the case civil and to protect your business from unjust fines and charges.

Why Does the U.S. Attorney’s Office in NYC Often Claim a “Federal Conspiracy” in Criminal Cases?

Prosecutors in the Southern District of New York tend to prefer conspiracy charges to squeeze multiple defendants as co-conspirators into one case rather than indicting a series of cases. Besides this aspect of convenience, conspiracy charges somewhat reduce the prosecutor’s burden of proof. Federal law does not require the government to prove that the individual defendants actually worked together, knew each other, or entered into a verbal or written agreement with one another. All the government needs to show (beyond a reasonable doubt) is that each conspirator knowingly participated in a criminal scheme.

What is white-collar crime?

What should I do if the FBI shows up at my house?

They one thing to always keep in mind when FBI agents show up at your home or business is not to speak with them about their investigation. At least not before consulting with an experienced New York City, NY federal criminal defense attorney. FBI agents do not need to be truthful with you when discussing the details of their investigation, and routinely tell suspects that they “just want to talk.” They do this in hopes of getting you to lower your guard, let them inside, or accidentally make an incriminating statement. Even if you were not a suspect, even a minor misstep can result in you putting yourself at the center of a federal investigation.

What is the difference between state and federal criminal charges?

While the difference between state and federal criminal charges can be complex, sometimes it boils down to violations of federal law are prosecuted in federal court and violations of state law are prosecuted in state court. However, given the overlap between state and federal crimes, federal prosecutors often have the ability to bring a case if they choose to do so. While federal prosecutors allow state prosecutors to bring most cases in state court, they will pick up cases that involve very serious or noteworthy allegations. Federal prosecutors also handle cases that involve a crime that was allegedly committed in more than one state.

When you hire Manhattan federal white collar defense attorney Dr. Nick Oberheiden, you will enjoy a lawyer with true experience. No matter how hopeless you consider your situation, Nick will explore different options and find mitigating factors and strong factual and legal defenses. Call Nick directly at 212-970-9468 or contact him online today.

Email Us 888-680-1745
Manage Cookie Consent
To provide the best experiences, we use technologies like cookies to store and/or access device information. Consenting to these technologies will allow us to process data such as browsing behavior or unique IDs on this site. Not consenting or withdrawing consent, may adversely affect certain features and functions.
Manage options Manage services Manage vendors Read more about these purposes
View preferences
{title} {title} {title}