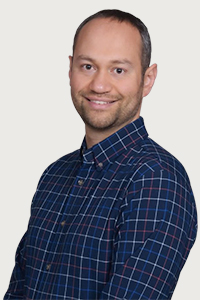 Samer B. Korkor is a former federal prosecutor with the U.S. Department of Justice (DOJ).  He represents clients in an array of white-collar criminal, regulatory, and civil matters.  Samer has 12+ years of experience providing advice and counsel on compliance, investigations, complex litigation, white collar criminal matters, and international evidence exchange and extradition.

Client Services. Having served in several key positions in the DOJ, at a major international law firm, and as a federal law clerk, Samer has experience covering all sides of civil and criminal matters in many industries, including healthcare, IT, automotive, manufacturing, retail, logistics, financial services, and others. Samer has demonstrated his expertise in his practice areas – serving as a law professor, publishing scholarship, delivering presentations, and providing thought leadership in major publications such as the Wall Street Journal.  While at the DOJ, Samer participated in and contributed to high-level decision-making processes, having served as Counsel to the Assistant Attorney General, and Counsel to the Deputy Assistant Attorney General / Attorney General’s Counsel on International Affairs.

White Collar. Samer offers clients a wealth of experience in the areas of white-collar defense, anti-corruption, and international criminal law. Samer spent over five years at an international law firm counseling clients in these areas. He also served as a federal prosecutor for several years, during which he prosecuted and litigated an array of fraud and other criminal cases on behalf of the U.S. Government.  In particular, Samer served as a DOJ trial attorney in the Criminal Division’s Fraud Section (FCPA Unit), as well as a Special Assistant U.S. Attorney in the District of Columbia.

International Law. Samer is uniquely qualified to provide counsel regarding the impact of transnational governmental cooperation as it relates to evidence exchange (mutual legal assistance) and fugitive apprehension (extradition). Samer has worked on international aspects of many of DOJ’s most sensitive and impactful matters garnering significant media attention, and with the potential to impact the U.S.’s international and bilateral relationships with key countries.  While serving as a trial attorney at DOJ’s Office of International Affairs, Samer was the point of contact on international cases involving the United States and many countries in Asia, Africa, and the Middle East.

Samer, with his wife and family, live in Maryland.  “Samer” is pronounced like “hammer” with an “s.” Samer is a Counsel at General Counsel, P.C.

Have you been charged under the FCPA?