Are you under investigation by the Milwaukee FBI, DEA, or IRS? Have you been contacted by the government, received a grand jury subpoena or a target letter from the U.S. Attorney’s Office at 517 E Wisconsin Avenue, Milwaukee, Wisconsin 53202? Are you accused of a crime? Are you looking for advice from an experienced federal attorney?

Most importantly, Nick’s track record in federal cases is hard to beat. Nick has avoided criminal charges in more than 90% of all federal investigations and maintains a 100% success rate of avoiding charges for those clients who were notified about a federal grand jury investigation involving them. Here are some recent examples:

And, the best thing? Nick does not delegate. There are no junior lawyers or paralegals that will handle your case. If you hire Nick, you get Nick. Personalized. Committed. Knowledgeable. Call Nick today 888-680-1745 and put an end to your nightmares!

Who Is Dr. Nick Oberheiden?

Born and raised in Germany, Nick moved to the United States some 15 years ago. He graduated law school in Germany, set records at UCLA School of Law (Juris Doctor ’07), and wrote a Ph.D. thesis, which was personally supported by United States Supreme Court Justice Stephen G. Breyer, the Chief Justice of the Brazilian Supreme Court, and other top legal authorities. To add, Nick was trained in negotiations and dispute resolution at Harvard Law School.

Nick began to practice litigation at one of the largest law firms in the world, White & Case LLP, at their New York world headquarters in a team of roughly 1,200 attorneys. Nick stood out because of his ability to communicate with international clients in their native language (Nick is fluent in French, German, English, Portuguese, and understands several other languages) and his relentless approach in litigation matters. Before Nick turned 30, he had already represented the governments of various countries in international conflicts and authored a plethora of books and legal articles.

Nick has always focused on federal cases. When he opened his own federal defense law firm, Nick was perhaps the only lawyer in the U.S. that only took federal cases (besides immigration lawyers) and quickly built a practice known and sought after across the entire United States. Nick has served as lead counsel in federal litigation matters in more than 35 states and Nick has argued cases before FBI and U.S. Attorney’s Offices in every corner of the country—including in some of the country’s most watched federal investigations.

Called by media stations as national expert for federal cases and trusted by clients for his exclusive focus on federal matters, Nick now offers his knowledge and help to the good people of Milwaukee, Wisconsin.

95% of all criminal cases are state cases. That means the vast majority of lawyers spend 95% of their time defending drunk drivers, shoplifters, and people accused of domestic violence.

Not so Nick. 100% of his practice is dedicated to federal litigation, government investigations, and federal criminal defense. In hundreds of cases, Nick has built a routine that is hard to replace. Nick knows how federal agents build a case—and what to do against it, when to intervene, how to argue in front of specialized prosecutors, and how to present himself before federal judges.

The truth is, federal cases are quite different than getting a misdemeanor in juvenile court. Federal agents (FBI, DEA, OIG, ICE, IRS) and federal prosecutors are well trained and work together to prosecute offenses that typically run up to 10 years in federal prison, per each violation. Because much more is at stake when it comes to protecting your license and your livelihood in federal courts, you should consider the above test questions when you make one of the most important decisions of your life. 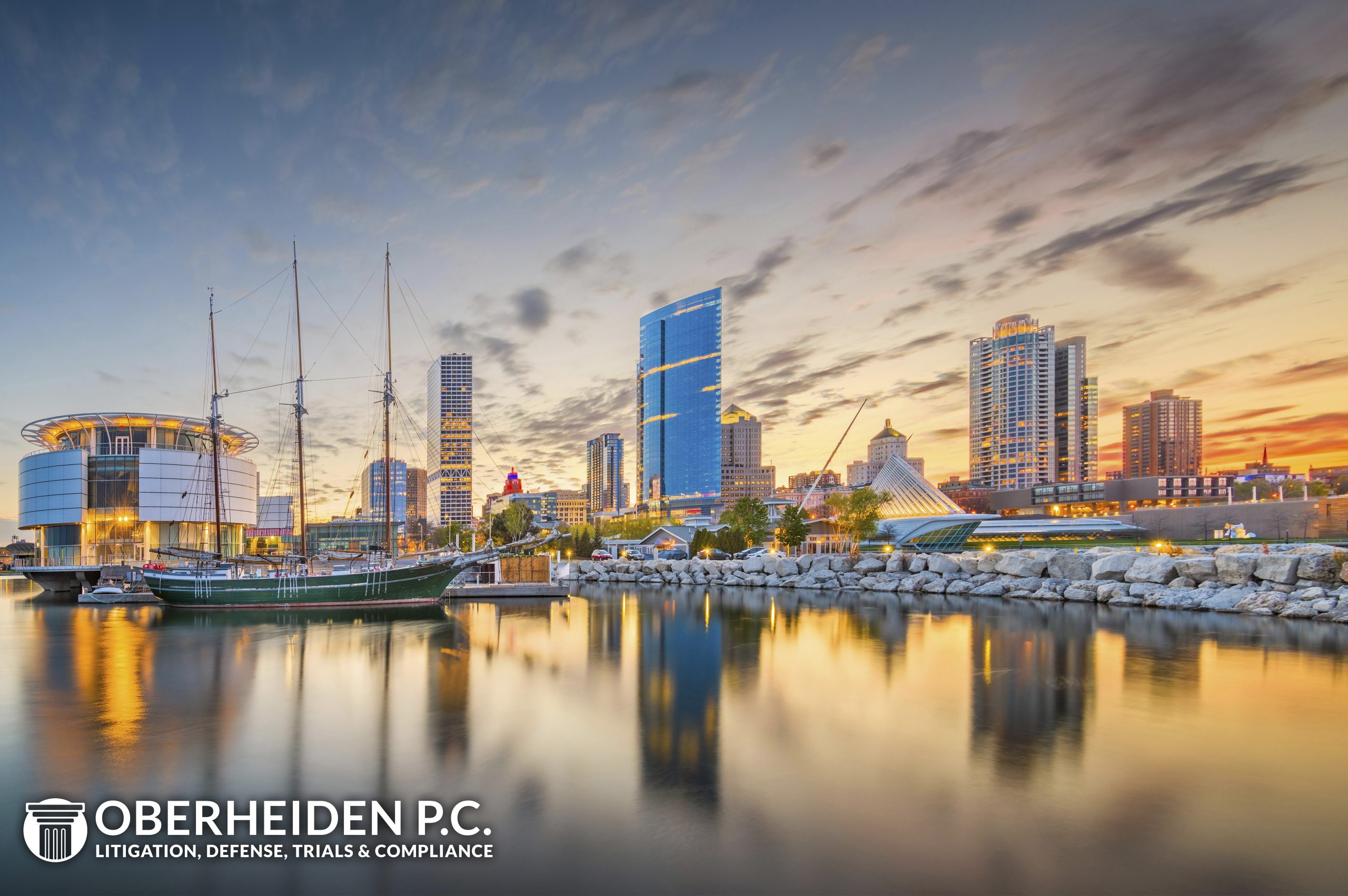 What You Need to Know About Federal Criminal Cases in Milwaukee, Wisconsin

Milwaukee is part of the Eastern District of Wisconsin, which is one of 95 federal districts nationally. Federal prosecutors and FBI, DEA, IRS, and OIG agents in Milwaukee and throughout Milwaukee County, Ozaukee County, Racine County, Waukesha County, and Washington County are tasked to investigate and prosecute federal offenses. The federal courthouse in Milwaukee is located at 517 E. Wisconsin Ave in Milwaukee, Wisconsin 53202 and the Green Bay federal courthouse is located in the Jefferson Court Building, 125 S. Jefferson St. in Green Bay, Wisconsin 54301. The following are among the most frequently questions clients ask attorney Dr. Nick Oberheiden.

What Type of Cases Does Nick Take in Milwaukee, Wisconsin?

Federal prosecutors often charge multiple defendants as co-conspirators in one federal conspiracy. The advantage for the prosecution of using the tool of a federal conspiracy is to combine different persons into one case without having to prove that the different codefendants worked together or even knew each other. To meet the burden of proving criminal misconduct beyond a reasonable doubt, the government simply needs to demonstrate that each defendant criminally contributed something to the overall criminal scheme. For example, in a federal drug conspiracy or a federal opioid conspiracy case (which are both governed by 21 U.S.C. 846), all the government needs to show is that each defendant knowingly added to the success of the unlawful conspiracy (e.g. drug dealer/runner; pharmacist and prescribing physician etc.). Classic examples of federal conspiracies are:

How Does Sentencing in Federal Cases in Milwaukee Work?

Sentencing in Milwaukee federal courts typically follows the uniform federal sentencing guidelines. After a defendant pled guilty or was convicted at trial, the U.S. Probation Office determines a sentencing recommendation to the presiding judge. The probation officer will take the seriousness of the offense, the injury of victims, the damage created, the defendant’s prior legal history, and many other factors into consideration before suggesting a sentencing range. Judges at the United States District Court for the Eastern District of Wisconsin in Milwaukee are not bound to follow the sentencing recommendations, but they often do leaving little room for upward or downward deviations from the probation officer‘s recommended sentence.

What Should I Do When the Milwaukee FBI Wants to Interview Me?

Put simply, you should never speak to Milwaukee FBI or other federal agents about your involvement (or non-involvement) in a federal case. The risk of you making incriminating or damaging statements without even noticing is exponentially higher than you helping your case. Even if you feel that you have nothing to hide, an experienced federal criminal defense attorney (and most certainly federal law-enforcement officers) may have a different position.

What Is Nick’s Experience in Federal Criminal Cases?

Federal cases are all Nick handles. While probably every criminal lawyer you may find online also offers representations in DUI and other state cases, Nick believes that true experience can only develop by arguing and defending cases –exclusively— in front of federal agencies, federal prosecutors, and in federal courts. Nick has appeared before virtually every federal agency including the FBI, the IRS, the DEA, the U.S. Secret Service, the Office of Inspector General, Department of Health and Human Services, the Department of Defense, the Department of Justice, the Department of Homeland Security, and other federal law enforcement agencies in charge of prosecuting federal offenses.

No. Indeed, Nick routinely defends clients in high profile cases, but Nick is available to anyone who needs help with a federal matter, be it an individual client or a company.

How Much Does It Cost to Hire Nick?

Nick offers fair rates, often below average. He will work with your budget and find a number that reflects the stage of the investigation and your personal financial means. For example, there is a difference between you needing a lawyer to handle your upcoming federal criminal jury trial versus you just need someone to answer some initial compliance questions regarding federal law. Just call Nick and find out how he could help you within your budget. Call 888-680-1745.

Dr. Nick Oberheiden limits his practice to federal law and he is admitted in the Eastern District of Wisconsin (Milwaukee, Green Bay), among other federal courts. If you would like to speak with Nick or meet him, call him directly on his mobile phone, including on weekends, at 888-680-1745. You can also contact him online. All consultations are free and 100% confidential.