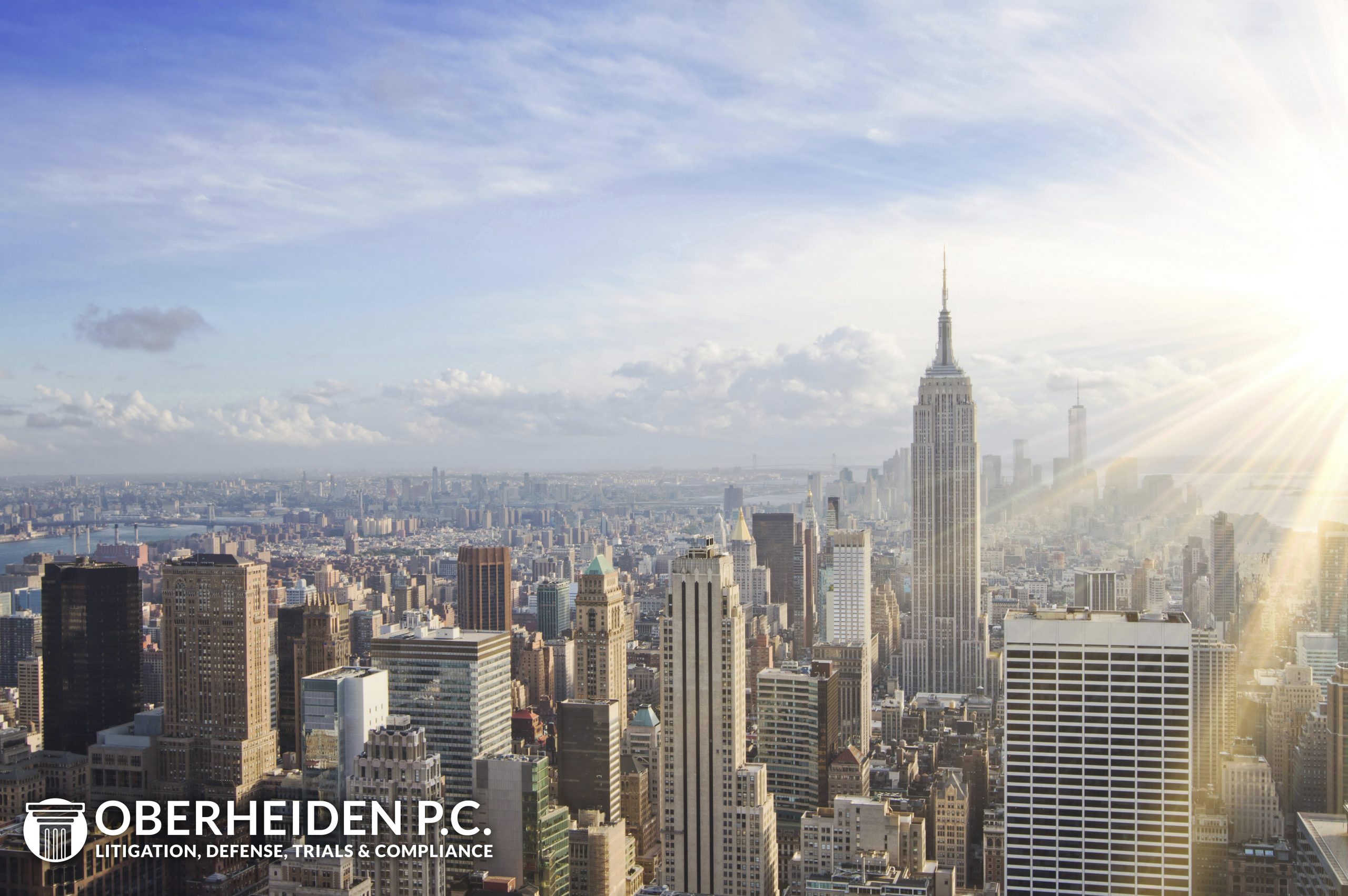 Are you accused of a crime in New York and nobody will ever be able to show that you had intent? Did federal agents show up at your business or at your residence? Were you served a grand jury subpoena or a target letter from the U.S. Attorney’s Office for the Southern District of New York in Manhattan? Were you recently arrested on federal charges? Is it time to team up with a skilled and experienced New York City federal criminal lawyer that has handled hundreds of federal cases and that does nothing but federal law work?

Meet NYC Federal Defense Attorney Dr. Nick Oberheiden. Unlike most other lawyers that have a diverse criminal practice, Nick dedicates his focus on federal cases with unique success rates. This is why media stations and so many clients in New York rely on Nick’s knowledge when it comes to government investigations and federal cases.

To be clear, don’t call Nick to help you defend drunk driving charges or rescue you from bar fight charges; just call one of the thousands of New York City federal crimianl defense lawyers specializing in that type of work. But do call Nick when your life is on the line because you are unfairly accused of a federal crime or subject to a federal case against the government.

In fact, just do what New York and national media stations do, do what clients from across the United States do: if you have questions about federal law, federal litigation, or want to know how to beat federal charges in NYC, then call our New York City federal criminal defense lawyer Nick at 718-521-2659 All consultations are with Nick personally and they are free of charge!

Fully devoted to federal cases, NYC attorney Nick Oberheiden is the federal criminal defense attorney to call when you need effective advice in times of crisis. With hundreds of government investigations and federal litigation matters handled, Nick offers clients proven defense tools rather than some “good” ideas and kind suggestions.

Remember: Federal cases are very different from state offenses. Nick is not a shoplifting defense attorney and he is the wrong lawyer to call for domestic violence charges. BUT: when the United States government, the Department of Justice, the U.S. Attorney’s Office, the FBI, the IRS, the DEA, the OIG-HHS agencies are after you, Nick will tell you exactly what to do and how to either avoid charges, get the case dismissed, or mitigate the situation.

The Southern District of New York, which covers Manhattan and White Plains, is known for its rigid enforcement of federal laws. More than any other federal district in the U.S., federal prosecutors in New York are known for their focus on bringing federal fraud and financial crime charges. Because federal offenses can result in years of incarceration, you must not gamble when it comes to selecting your legal representation. Don’t even think that you will get a second chance!

Week after week, physicians in New York are targeted by a plethora of civil and criminal fraud charges, whistleblower lawsuits, false claims act investigations, Medicaid fraud, Medicare fraud, Stark Law, and allegedly illegal business relationships under the anti-kickback statute. In the current climate of enforcement, there is no time to waste and there’s no time to experiment. Find relief and have an experienced healthcare fraud attorney help you fight wrongful allegations so that you can continue your business and maintain your license.

Related to the healthcare industry, but by now a category of itself, are current opioid investigations targeting New York physicians and pharmacies. Shortly after the Trump Administration declared pain management prescription abuse a focus of their law-enforcement efforts, federal prosecutors in New York, in conjunction with DEA agents of the New York DEA field office, have started to aggressively take down the practices of family doctors, internal medicine physicians, and pain management specialists. Without doubt, New York-based pain medication prescribers are more exposed than others to become a target of an audit, a DEA search warrant, or, as several recent cases have shown, of criminal prosecution.

New York is the capital federal enforcement city and state of so-called financial crimes. Nowhere else in the country are prosecutors more ready to confront big and small businesses as well as individuals with securities fraud, bank fraud, tax fraud, mail and wire fraud, money laundering, and healthcare fraud to name just a few financial crimes.

When Your NYC Business is Under Investigation

DEA & FBI Search Warrant. What is true for New Yorkers is also true for New York prosecutors: they are tough. More than elsewhere, prosecutors in New York tend to prefer running an investigation and collecting evidence by executing a federal search warrant. If this happened to you or your practice or your business, you must understand that a federal magistrate judge saw probable cause that you committed a crime. That said, a search warrant is a clear indication that the U.S. Attorney’s Office in New York is planning (if not already determined) to bring felony charges against you. However, not every search warrant increases such risk of being charged— if you take immediate steps with your trusted attorney to control the situation and to vigorously oppose the government’s investigation.

Federal Agents At Your House. One of the most common tactics in federal investigations is to send agents for interviews of potential subjects or targets of the investigation. If this happens to you, remember that speaking to a federal law-enforcement officer, such as an FBI agent, is the equivalent to testifying in federal court. You can’t undo your statements and even if you believe that you are innocent and have nothing to hide, the trained agents will do their part to interpret your answers diametrically different to what you were trying to say. In that moment of surprise, when agents show up unexpectedly, stay calm and polite and insist on the presence of a federal defense lawyer. If this lawyer happens to be NYC federal criminal defense attorney Nick Oberheiden, he will reach out to the government on your behalf to first understand what role you may play in this investigation and what benefits there may be for you to volunteer for an interview with law-enforcement. While many inexperienced attorneys rush their clients to the FBI simply because the FBI asked them to do so, New York City federal crimianl defense lawyers with actual federal experience will analyze the situation and, in most cases, determine that an interview may not be in your best interest.

Grand Jury Subpoena. If you receive a grand jury subpoena from the U.S. Attorney’s Office for the Southern District of New York, your systems should go into alarm mode. A federal grand jury is tasked to determine against whom to bring felony charges in a particular investigation. The fact that you received a grand jury subpoena requesting your testimony and/or documents from you suggests that the grand jurors and the United States government consider you part of the investigation, be it as a witness, subject, or target. New York attorney Nick Oberheiden has protected individual and corporate clients against grand jury investigations and criminal charges in federal courts across the United States. He understands the mistakes to avoid and the strategies to pursue to make sure that your case outcome resembles the outcome of his other clients: that is that the right defense strategy will allow you to escape the investigation without any charges or liability found against you.

What is a grand jury?

A grand jury is a group of citizens who hear a case presented by federal prosecutors and then determine if there is probable cause to indict the target of the investigation. Grand juries are carried out in secret, and there is no judge or defense counsel present. So the prosecutor controls all the evidence the grand jury considers. While federal prosecutors should present evidence that is favorable to the defense during a grand jury proceeding, there are very few ways to ensure this is the case. Not surprisingly, many grand juries end up finding probable cause that the target committed the offense. This, however, does not mean that the target is guilty; they are still presumed innocent and entitled to a trial. If you were recently indicted by a grand jury, contact an experienced New York City, NY federal criminal defense attorney as soon as possible to discuss your possible defenses.

When should I contact a New York City federal criminal defense attorney?

You should reach out to an attorney as soon as you hear any type of rumor—substantiated or not—that you are under investigation for a federal crime. The more quickly you retain an experienced New York City, New York federal criminal defense attorney, the sooner they can get to work investigating the allegations and developing a defense. In some cases, an attorney will actually be able to limit the scope of an investigation before it results in criminal charged being filed.

Should I talk to federal prosecutors about a plea agreement?

Not without first speaking to a New York City federal criminal defense attorney. While, in some cases, a plea agreement is the inevitable end result, this shouldn’t be your focus early on in the process. Instead, you should discuss your case with an experienced attorney who will investigate the government’s case looking for weaknesses. Generally speaking, the more prepared you are to take the case to trial, the more the prosecution will rethink its position. However, if you run to federal prosecutors asking for a deal, it will only reaffirm their already strong belief that you are guilty of the charged offenses. This also gives the impression that you do not want to go to trial, reducing any incentive they have to offer a favorable plea agreement.


How Can I Engage Nick’s Services?

The easiest part of your case is to contact Nick. If you call Nick, your call will go straight to Nick. He will take the time to listen to you and provide you with a free assessment. If you want to move forward with the representation, Nick will send you an email with all next steps. Super easy!

Is It Possible/Common to Switch Federal Criminal Lawyers?

Absolutely. About 50% of Nick’s clients are dissatisfied with their previous counsel and realized that he/she did not really have the experience they thought the lawyer would have. Whether Nick is being added or hired to replace a current NYC federal criminal defense lawyer, there is no issue of you modifying your legal team. Sometimes a fresh perspective changes everything!  Just call Nick and find out what Nick would do if he were your lawyer.

When you hire New York City federal criminal defense attorney Nick Oberheiden you hire a lawyer that you can trust, a lawyer that will be personally in charge of your case and not delegate your important case to junior lawyers or less experienced counsel. No matter what you are accused of, with Nick on your team, you will send a strong signal to the prosecutor that you are willing and able to fight the charges. So, let’s get together and take control of your case. Call Nick directly at 718-521-2659 or contact him online today.