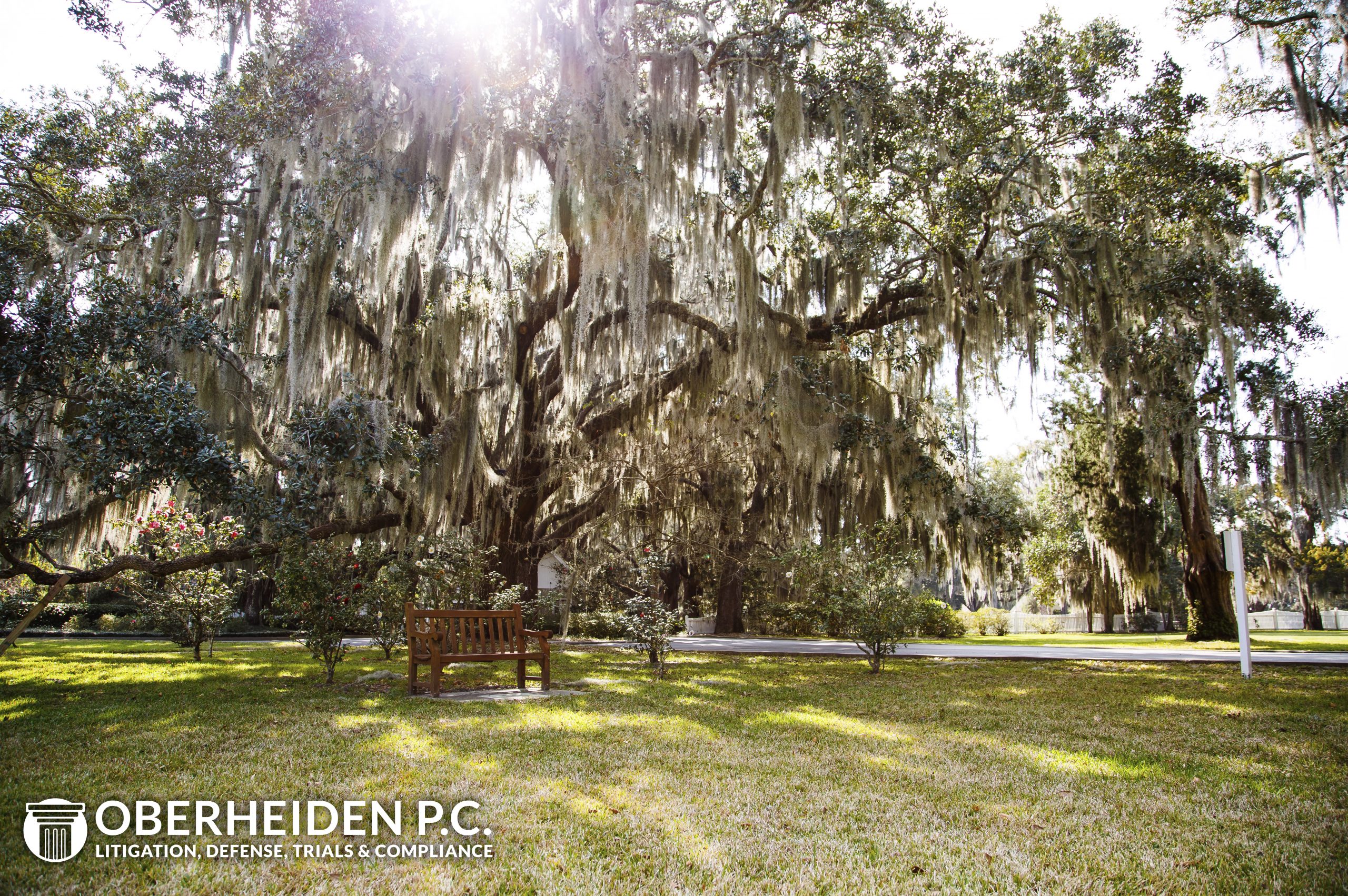 Our Louisiana federal criminal defense lawyers represent clients in New Orleans, Baton Rouge, and throughout Louisiana. If you are under investigation, if you have been served with a grand jury subpoena, or if you are facing federal charges, you can call 888-680-1745 for a free and confidential consultation.

Facing charges for federal crimes is an extremely serious matter. You could be facing years or decades of imprisonment and potentially hundreds of thousands or millions of dollars in fines, and a conviction could impact all aspects of your personal, family, and professional lives. Fraud crimes, financial crimes, drug crimes, and other crimes all carry severe penalties under federal law, and federal prosecutors aggressively pursue all charges through trial, sentencing, and appeal. At Oberheiden, P.C., we provide strategic and aggressive representation backed by centuries of experience in federal criminal matters. Our federal criminal defense team includes nationally-renowned defense attorneys and former federal prosecutors who have handled thousands of cases throughout Louisiana and nationwide. Whether you have just been contacted by federal agents, you have been arrested or served with a subpoena, or you are awaiting a criminal trial in federal district court, our defense team can execute a comprehensive defense strategy designed to secure as favorable a result as possible in light of the circumstances at hand.

Our federal criminal defense practice consists of representing clients in matters involving the Department of Justice (DOJ), Drug Enforcement Administration (DEA), Federal Bureau of Investigation (FBI), Office of Inspector General (OIG), U.S. Attorney’s Office, and all other federal agencies. We have successfully defended public figures, politicians, licensed professionals, company executives, business owners, and other high-profile and high-net-worth individuals in cases involving allegations of virtually all major federal offenses. Our attorneys are available to represent clients facing prosecution in the Eastern, Middle, and Western Districts of Louisiana for charges including:

Fraud is among the most-common allegations in federal criminal investigations. We handle cases involving government benefit program fraud (i.e. Medicare, Medicaid, and Tricare fraud), government contract fraud, and fraud targeting financial institutions and other private parties. Our Louisiana federal criminal defense attorney is intimately familiar with the statutes federal prosecutors use to pursue charges and the defenses that are available for offenses including:

Financial crimes involve obtaining money, securities, debt, and other things of value through unlawful means or for illegal purposes. Individuals and organizations can face prosecution for bribery, Internal Revenue Code (IRC) violations, and a broad range of other offenses under a litany of federal laws. We have particular experience in cases involving allegations of:

Our attorneys also have experience on both sides of cases involving a broad range of other white-collar offenses. This includes the “inchoate” offenses of conspiracy and attempt, as well as drug crimes such as manufacturing and distribution, business crimes, and terroristic threats. If you are under investigation or facing charges for any of the following, it is imperative that you seek legal counsel immediately.

The federal prosecutorial process has three primary stages, and each stage requires its own unique strategy and approach. We provide custom-tailored representation for clients at all stages of the process, whether we are engaged at the start of the government’s investigation or on the eve of trial.

Federal investigations often involve multiple federal agencies; and, in many cases, they will start out civil in nature. Most investigations become criminal when federal agents find evidence of intent, and when this happens the posture of the case shifts entirely. We have secured favorable results for numerous clients during the investigative process, in many cases terminating the government’s investigation with no civil or criminal liability for our client.

In federal cases, prosecutors must obtain an indictment in order to pursue formal charges. This is done through the grand jury process. While targets of federal investigations are not entitled to legal representation in the grand jury room, thorough preparation with an attorney is critical, and targets can request to speak with their counsel outside of the presence of the grand jury.

Following an indictment, the case then gets set for trial. At this stage, while going to trial is a possibility, it is also still very possible to achieve a favorable pre-trial resolution. Our federal criminal attorneys have had federal indictments dismissed prior to trial, we have reduced felonies to misdemeanors and negotiated favorable plea deals that have kept our clients out of prison, and we have successfully argued for “not guilty” verdicts in federal district court.

Q: What is a target letter?

Q: What does it mean to be targeted as a “coconspirator” in a federal conspiracy?

The federal conspiracy statutes, including 18 U.S.C. § 371, 18 U.S.C. § 1349 and 21 U.S.C. 846, among others, impose criminal penalties in cases where no substantive federal crime has been committed. In order to face prosecution as a “coconspirator,” it is enough to knowingly play a role in developing or executing a plan to commit a federal offense, provided that at least one coconspirator (even if it was not you) undertook at “overt act” toward commission of the crime. The evidence required to prove each element of a conspiracy is minimal; and, in many cases, individuals charged with conspiracy can face the same penalties as someone who fully commits the underlying offense.

Q: What is the burden of proof in federal criminal cases?

The burden of proof in federal district court is the same as it is in state court: “beyond a reasonable doubt.” This means that, in order to obtain a conviction, federal prosecutors must convince the jury that you are guilty with more than 99% certainty. While this burden is extremely high, federal prosecutors are very good at what they do; and, regardless of what you think about the veracity of the allegations against you, you need to put everything into your defense.

Q: What should I do if I have been contacted by the DOJ, DEA, FBI, OIG regarding a criminal investigation?

If you have been contacted by federal agents, you need to speak with a Louisiana federal criminal defense lawyer immediately. You are entitled to advice of counsel, and there is too much at risk for you to deal with federal agents without the benefit of legal representation. Even if the agents are simply requesting an “interview” and claiming that you are a witness rather than a target, you need to assume that anything you say will be used against you.

Q: What is a grand jury?

A grand jury is a group of citizens that the government impanels to determine whether it can bring charges against a defendant. Grand juries are used before charges are filed, which is different from trial juries that determine whether a defendant is guilty of the charged crime. The prosecution will present evidence to the jury without informing the subject of the investigation and, if the grand jury believes there is probable cause to bring charges, it will issue a “true bill,” which allows the government to bring criminal charges. If you recently received a grand jury indictment, it is in your best interest to consult with an Alaska federal criminal defense attorney immediately to get started on your defense.

Q: If I am facing charges for a federal offense, what are the chances that I will be sent to prison?

Federal sentencing is extraordinarily complicated. While prison time is a very real possibility, it is also possible to avoid incarceration even if the Federal Sentencing Guidelines call for prison time. Your level of exposure depends heavily on the facts and circumstances involved in your case; and, to assess your risk of prison time, we will need to speak with you about your case directly.

When facing federal charges, your choice of legal representation can have a significant impact on the outcome of your case. Here are five reasons why clients in Louisiana and nationwide trust Oberheiden, P.C.’s federal criminal defense team:

We have a nationwide reputation for securing favorable results in complex and high-stakes federal matters. Our federal criminal defense attorneys have secured favorable results for clients at all stages of the process, and they have been asked by media outlets to comment on federal cases in all 50 states.

Our practice focuses exclusively on federal cases. Federal and state cases are more different than they are similar, and unlike most other firms we do not spend the majority of our time in state court.

With centuries of combined experience, our attorneys have handled more than 1,000 investigations and 500 trials. This extraordinary volume of experience allows us to anticipate key issues and offer advice based upon past real-world results.

5. Your Initial Consultation is Free and Confidential

To speak with a member of our federal criminal defense team in confidence, please call 888-680-1745 or contact us online. We can conduct your free initial consultation over the phone, and our attorneys can arrange to be on the ground in Louisiana immediately if necessary.